Earlier posts:
Swine and Mankind - The satiating power of dietary fat, mankind’s long history with swine, and the changes made to swine through genetic selection and some implications for humans fighting excess fat.
Lard, Glorious Lard – The uses and benefits of lard.

Here’s the process I use to render our lard and beef tallow:
Shred the frozen pork fat in a food processor. (During my first attempt at rendering lard I just cut the fat into chunks, but shredding produces a better yield, in much less time, and the resulting lard is whiter.) 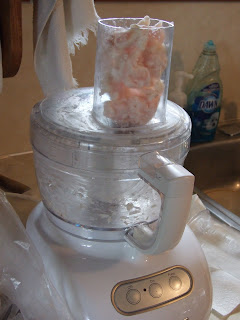 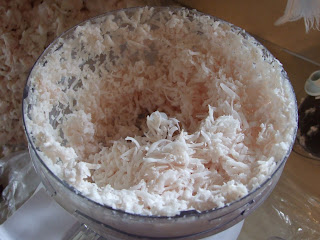 Place the shredded fat in a heavy pan on medium heat.
﻿Since the fat is shredded, it doesn’t take very long to render (note the time on the stove clock).
Once the bubbling has somewhat subsided (about 30 minutes), strain the fat through cheesecloth to remove the cracklins.
Pour the fat into loaf pans and allow to cool and solidify at room temperature. Once cooled, place the pans in the refrigerator to fully harden. Once fully hardened, I remove the lard from the loaf pan, wrap in wax paper, put it in a plastic bag, and freeze it.

I use a 1-to-1 mix of lard and tallow for our pemmican and we use lard as a cooking fat, but most of that comes from cooking side pork (the uncured part of the pig that's made into bacon).