While I Recover From the Last Three Weeks ...

The last three weeks have been VERY full. Lots of great moments, with the Spring Fling Hammered Dulcimer Gathering capping it all off last weekend. I'm trying to get caught-up, and writing for this blog hasn't been at the top of my list. I'm trying to get into the habit of posting regularly, so here are two informative videos I found on a post Tom Naughton's blog.

I wasn't aware of Dr. Scott Connelly or his Body Rx book and website. From the comments section of Tom's blog I understand that Dr. Connelly has been ill recently and his condition is seen in these videos. No matter, the information is solid and his presentation is good. I've got a slight problem with some of his language, but it's relatively mild.

Last weekend I attended the combined meetings of American Society of Bariatric Physicians and Nutrition and Metabolism Society. Among the many great researchers I met was Dr. Stephen Phinney. Over dinner the topic of pemmican came up, and we shared our recipes. During his presentation he discussed the importance of pemmican in the diets of the people who inhabited the Great Plains of North America prior to, and for some time after, the arrival of European settlers.

Pemmican is produced by pounding or grinding dried lean meat and combining it with rendered fat. It is equal parts, by weight, of dried meat and fat. Pemmican kept indefinitely without refrigeration, had a greater nutrient density than any other food, and as such, was the ideal “trail-food”. It sustained the Plains people in extraordinary health for centuries, and fueled the European exploration of North America and beyond. And then the modern nutritionists decided it needed to be “improved.”

Convinced that this meat and fat mixture couldn’t be “healthy” without vegetable matter, they started formulating various mixtures with nuts, dried berries, dried fruit, and grains in varying proportions based upon their own unsupported theories. Whatever your belief about the essentiality of carbohydrates in the human diet (they aren’t!), one fact is clear: the addition of carbohydrate to traditional pemmican reduces its nutrient density.

Remember the story of the British Antarctic Expedition of 1910, led by Robert Falcon Scott? Barry Groves explains in his book Trick and Treat that Scott was talked into supplying the party with this “improved” pemmican. 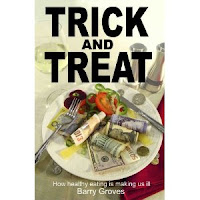 Anyone who’s been backpacking knows that the weight of your supplies is a limiting factor. Outfitting an expedition is a situation where nutrient density (amount of nutrients per pound of foodstuff) is critical. Returning from successfully reaching the South Pole (although they were beaten to the goal by a Norwegian team lead by Roald Amundsen), the three surviving members of Scott’s party died shortly after March 29, 1912 - 11 miles short of a major supply depot. Groves suggests that Scott and his party are among the first victims of the “modern” nutritionists.

Nancy read The Fat of the Land, by the Canadian Arctic explorer and ethnologist Vilhjalmur Stefansson. 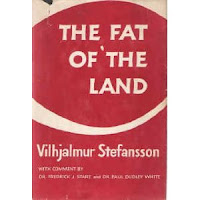 Stefansson lived among the Inuit and other northern peoples for extended periods. He reported that these people ate a diet consisting of animal fat and protein and were remarkably healthy. Again, the nutritionists disagreed. It couldn’t be true because they knew humans needed vegetable matter to provide “essential” nutrients. Stefansson ultimately proved his point by submitting to a year-long study where he ate an all-meat diet. But perhaps that’s a story for another post. 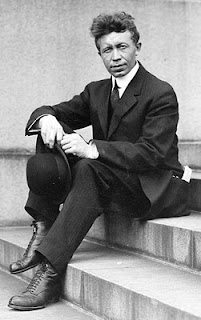 Armed with Stefansson’s description of pemmican as a 1:1 dried meat to fat mixture by weight, we began our experiment:

Starting with our oven-dried beef. Remove as much fat as possible, and slice it thin. Place it on racks in the oven at 150 F. Every half hour or so, turn the pieces to promote even drying. There are other methods. Dr. Phinney uses a microwave set on 10% power. I’m afraid I didn’t get all the details during our dinner conversation. I’ll try to get the full information. If I do, I’ll post it here.
Rather than pounding the jerky to produce shreds, I used the food processor to chop it up. 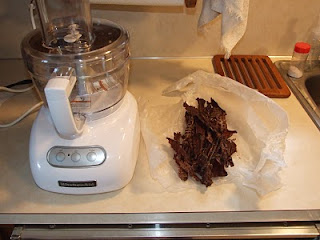 I’ll try to leave it a little coarser in the future. 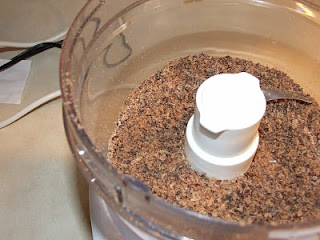 Transfer the meat to a bowl and add an equivalent amount of melted fat. 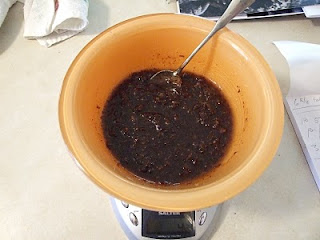 We’ve used home-rendered beef tallow, but the flavor is a little strong for us. Instead, we use a 50-50 mix of tallow and lard which we render from our locally produced, grass-fed beef and pastured pork. Because of the lower saturated fat content of the lard, this pemmican is softer than pemmican made with tallow would be. We store them in the refrigerator, so that’s not an issue.
We use some inexpensive candy molds to make bite-sized pemmican pieces. 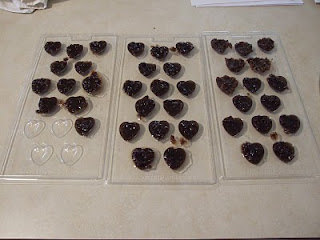 After cooling in the refrigerator, they pop out of the mold fairly cleanly. 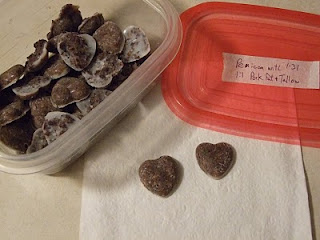 Two of these are a lot to eat, approximately 5 grams each, 38 Kcal, 1.2 g Protein & 2.5 g fat. Compare that with those "100 Calorie pack" snacks items ...
Dr. Phinney appreciated the irony of the shapes. Heart-healthy! We’re not planning to apply for Heart Check logo approval …
Posted by Pete B at 5:15 AM No comments: