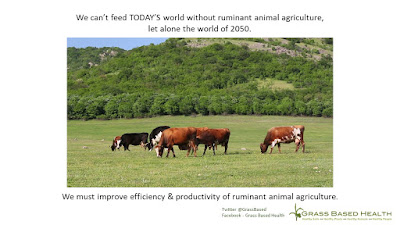 Human beings exist because of ruminants. Today’s societies rely upon them. Humanity’s future depends upon improvements in the productivity and efficiency of worldwide ruminant animal agriculture. Like the general public’s confusion of what constitutes a “healthy diet,” tremendous misunderstanding exists regarding the environmental role of ruminant animals. Human beings didn’t evolve to eat meat, they evolved because they ate meat - and because they learned to cook and process meat and other foodstuffs. Unsurprisingly then, diets rich in butter, meat and cheese have been shown to promote human health and development. Of significant worldwide impact, such diets can correct the symptoms of metabolic syndrome, offering hope in arresting the current worldwide epidemic of chronic diseases. The Dietary Goals for the United States and the subsequent eight editions of the Dietary Guidelines for Americans, however, are based on the belief that plant-based, high-carbohydrate diets are “healthy.” But since nutrition research does not support the belief that vegetarian diets are healthier than animal-based diets, an appeal to “sustainability” is now used to justify these recommendations and argue against the Restricted Carbohydrate approach. True sustainability is a multifaceted topic that should consist of societal, economic, and ecological aspects. The enormous suffering and financial costs of chronic illness must be acknowledged. The production of high-quality animal protein and animal fat by ruminants from feed resources humans cannot directly utilize will be fundamental to feeding a growing population. What’s more, this essential food production can preserve and enhance the diverse environments where it takes place. We need a revolution in our thinking of what constitutes a healthy diet, of what causes chronic illness, of the vital role that animal product play in the human diet, and the essential nature of ruminant animal agriculture in meeting humanity’s needs. This will mean overthrowing established policies and institutions, and confronting vested belief systems. In addition, we need an effort, analogous to the Green Revolution, to develop and deploy the knowledge and technology necessary to meet the mid-21st Century demand for ruminant animal products while preserving and enhancing the environments in which they’re produced.
Posted by Pete B at 11:14 AM No comments: