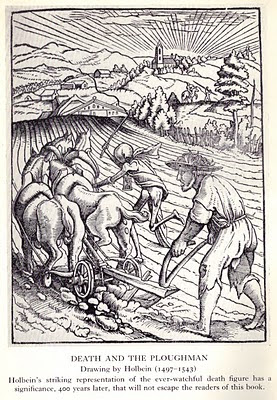 Those familiar with the concept of a Paleolithic diet will see the irony in this drawing by Hans Holbein the Younger (1497-1543). Though it goes against my agriculture school training, there is compelling evidence that agriculture has not been an unqualified blessing to mankind. Many will argue that the health of mankind has suffered. Paleolithic, or pre-agricultural, humans were of larger stature than their Neolithic, or agricultural, cousins. The fossils of Paleolithic and Neolithic humans can be differentiated by the presence of pathological conditions that were absent in Paleolithic humans. I came across Holbein’s drawing in the book Soil, Grass and Cancer by André Voisin. His hypothesis, seemingly supported by an impressive amount of data, was that people who ate the products of heavy clay soils suffered numerous health problems, such as thyroid disease and cancer, in spite of the fact that the soils were rich in minerals. 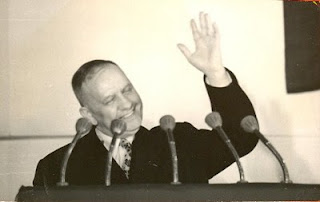 Voisin’s name is familiar to those who’ve read about intensive grazing management. His earlier book, Grass Productivity, is considered a classic in the subject. Born in France in 1903, André Voisin was both a biochemist and a farmer. He taught biochemistry at the National Veterinary School of France as well as at the Institute of Tropical Veterinary Medicine in Paris. But his great insights regarding soils and grass came to him in the hours he spent watching his own cows graze the pastures on his farm in Normandy. Although he was a scientist by profession, Voisin remained a farmer at heart. He understood that if the soils and grasses were managed with care, they would in turn take care of the animals who lived on them; and if our domestic animals were healthy and well fed, then those who consumed the animals and their products would also enjoy good health.

In Grass Productivity, Voisin documented the effect of the length of the “rest” period between grazings, and the length of the grazing sessions on green pasture dry matter production and green dry matter intake by dairy cows. His “Four Laws” of what he called “rational grazing” are applicable “whatever the soil conditions, climate, altitude, latitude or longitude.”

First Law: Before a sward, sheared with the animal’s teeth, can achieve its maximum productivity, sufficient interval must have elapsed between two successive shearings to allow the grass:

Second Law: The total occupation period on one paddock should be sufficiently short for a grass sheared on the first day (or at the beginning) of occupation not to be cut again by the teeth of these animals before they leave the paddock.

Third Law: The animals with the greatest nutritional requirements must be helped to harvest the greatest quantity of grass of the best possible quality.

Fourth Law: If a cow is to give regular milk yields she must not stay any longer than three days on the same paddock. Yields will be at their maximum if the cow stays on one paddock for only one day.

I’ve enjoyed getting re-acquainted with Grass Productivity. It’s been a while since I last read it. It was during a search for “Voisin” during an on-line search of the Oregon State University Library catalog that I came across Soil, Grass and Cancer. Healthy soil, according to Voisin, is more than a collection of minerals. His data seemed to suggest that people who ate the products of heavy clay soils suffered numerous health problems, such as thyroid disease and cancer, in spite of the fact that the soils were rich in minerals. He believed that organic matter served as the catalyst for mineral absorption. Minerals must first be consumed by earthworms and microscopic life and excreted as humus before they can be easily taken up by grazing animals, Voisin believed.

In addition, Voisin believed that soil nutrient balance was important. Application of concentrated fertilizers like potassium chloride and calcium nitrate to grassland, could result in a deficiency of sulfur. Voisin suggested that this deficiency would prevent plants from producing sufficient quantities of sulfur-containing amino acids and the health of the animals will suffer accordingly.

While I credit Voisin with being a visionary when it comes to dairy pasture management, I’m afraid he was mistaken in his beliefs regarding soil and cancer. His errors are similar to those of many who’ve followed him. Numerous hypotheses about the cause of cancer, and other chronic diseases, have been advanced over the years. All too often the hypotheses were based upon the weakest of data. Sadly several have become the basis of numerous regulations and official governmental policy. Shockingly they’ve done so in the face of a compelling counter-hypothesis that continues to gain scientific support. In a perfect world, it would now be considered a theory.

“Cancer, like insanity, seems to increase with the progress of civilization.”

Stanislas Tanchou was a physician who, following his service with Napoleon, entered private practice and studied the statistical distribution of cancer. Tanchou presented his complex statistical examination of malignancy to the Paris Science Society in 1843 (1). He documented evidence of increased malignancy with increased civilization. One of the prime indicators of a civilizing trend was a diet that included sugar and white flour. The greater the consumption of these foods, the greater the incidence of malignancy.

Tanchou was the first of many physicians to document what have been called "Western Diseases" or "Diseases of Civilization." The incidence of several diseases, including cancer, increases in direct proportion to the "civilization" of a nation and its people. Evidence has continued to accumulate that as populations shift from their traditional diets to diets that contain refined carbohydrates, diseases which had not been present begin appear. And as the amount of refined carbohydrate in their diet increases, the incidence of these diseases increases. This pattern has been observed in populations on every continent.

Richard Doll (the man that proved the link between cigarette smoking and cancer) and Richard Peto’s 1981 paper “The Causes of Cancer: Quantitative Estimates of Avoidable Risks of Cancer in the United States Today” made the following points: (2)

At least 75 to 80 percent of cancers in the U.S. would be avoidable with appropriate changes in diet and lifestyle.

Diet plays the largest role – from 10 to 70 percent of all cancer.

Couple these points with the wealth of information about what causes Western Diseases and you’ll find what constitutes a cancer-avoiding diet – one that is low in carbohydrate. Unfortunately that message isn’t supported by Conventional Wisdom or by the United States Government.

“It appears that only a very small part of the total cancer burden can be directly related to industrialization.”

Remember, it wasn’t industrialization that introduced cancer and other Western Diseases to populations, it was refined carbohydrates! It seems so clear, yet official policy and legislation has been focused in other directions. In part because of faulty science, and in part because of competing interests.

Another quote from Higginson:

“If [environmentalists] could possibly make people believe that cancer was going to result from pollution, this would enable them to facilitate the clean-up of water, of the air, or whatever it is… to make cancer the whipping boy for every environmental evil may prevent effective action when it does matter.”

One of the implied benefits of “organic” food is that, since it was grown without pesticides (except for those approved “organic” pesticides, of course!) consumers will reduced their risk of cancer by consuming it. But if Tanchou and all the others have been right all along, it’s organic “carbage” (organic toaster pastries, breakfast cereals, sugar, white flour, etc) and conventional "carbage" that’s posing the greatest risk for cancer.